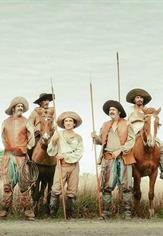 ZAMA is the story of a man who expects to be recognized for his merits. But in the years of waiting, he loses everything. He decides to catch a dangerous bandit and retrieve his name. With the failure, he is released from his waiting. Adapted from the novel of the same name by Antonio di Benedetto.