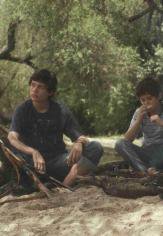 THE THIRD SIDE OF THE RIVER

As tensions rise due to the pressures of his overbearing father, 17-year-old Nicolas is driven to extreme action to claim his own future… A tense father-son drama from the director of A WEEK ALONE (UNA SEMANA SOLOS) and ANA AND THE OTHERS (ANA Y LOS OTROS).