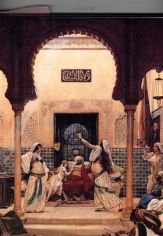 In the Spanish city of Cordoba in the Ninth Century AD, at a time when the rest of Europe still languished in the Dark Ages, Christians, Jews, Muslims and atheists lived together in tolerance. This moment in history gave rise to some of humankind's greatest achievements in the arts and sciences.