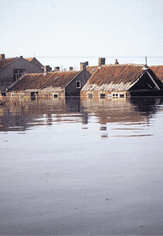 In the night of 31 January to 1 February 1953, the southwest of The Netherlands was battered by a devastating storm. The North Sea flooded into vast areas of Zeeland, almost two thousand people died, thousands of animals drowned and more than four thousand houses were destroyed.