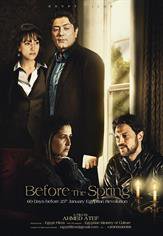 A young blogger who lost both eyes during the Egyptian Revolution recounts in flashback the story of the Spring that has finally come to his country. He tells how he and his friends were able to move a mountain. His insight, which often surpassed his ability to see, foretold the coming Egyptian Revo