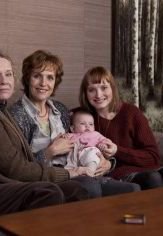 Europe 1990, the Berlin wall has just crumbled: Katrine, raised in East Germany, but now living in Norway for the last 20 years, is a "war child", the result of a love relationship between a Norwegian woman and a German occupation soldier during World War II.