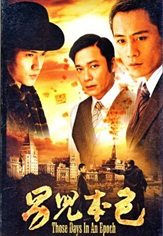 THOSE DAY IN AN EPOCH (38 EPISODES TV SERIES)

Vengeance on his father's murder filled Hong’s mind;when his career just took off in Shanghai stock market in the 1930s,the stakes he risked in the vendetta would be his career and beloved ones.Directed by TV veteran Lizhen Zheng and with strong cast, the epic drama has a smash premiere in China.