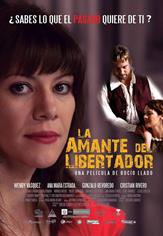 THE WOMAN BEHIND THE LIBERATOR

In 2012, while avoiding the demolition of a colonial Peruvian mansion; A Peruvian immigrant woman, returning briefly from Spain, discovers that she and others had inhabited the very same house two hundred years prior; before Peruvian independence from Spain in 1821.