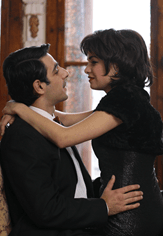 Pop singer Lia Ivanova’s life story is a chance to explore survival as a spiritual drama in a dark era. In his old age, the composer Edward Kazasyan discovers that his late wife Lia, after surviving concentration camp, had worked for the secret service. The dusty folders at the State Security Archive of their dossiers and her childhood diary reveal to him a second life, directed by others. Tormented by doubts, he relives their love and career in his imagination trying to make sense of this complex human puzzle.

The film is based on key moments from a true life story.