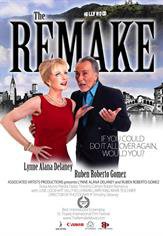 If you could do it all over again…would you?

Two actors who originally hooked up during filming in their early 20’s find love can be even more complicated the second time around when reunited to star in an updated remake of their earlier film.