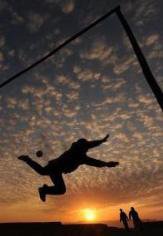 La-mint, is the story of Mario, a young fellow who realizes he is cursed when his best friend dies after he kicks a balloon on his bullocks, bleeding on a baby soccer court, dying on his arms. That's how he will have to face his destiny to get the love of his beloved one.