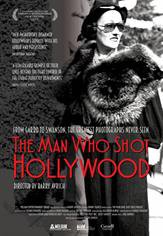 THE MAN WHO SHOT HOLLYWOOD

In a town lit up by a thousand stars, Jack Pashkovsky practiced his art anonymously. By the time he was finished, he had brilliantly photographed hundreds of the biggest Hollywood icons from Garbo to Swanson. His collection of photographs have never been seen. Until now.