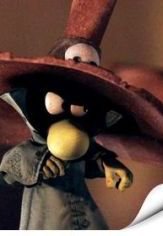 THE KROSTONS - MASTERS OF THE UNIVERSE - IN 3D

The film, to be directed by Frederik Du Chau from his own script, is based on the comic book characters The Krostons, created by the Belgian artist Paul Deliege. He first introduced the little green creatures in the comics magazine “le Journal de Spirou” in 1967