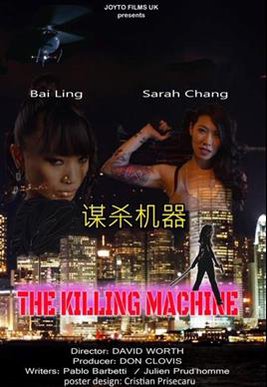 THE KILLING MACHINE
Writers: Pablo Barbetti / Julien Prud’homme
Producer: Don Clovis
JOYTO FILMS UK LTD
Director: DAVID WORTH ( KICKBOXER, BLOODSPORT,HONOR etc )
Synopsis:
In the ex-British colony of Hong Kong, the world is changing fast and even ancient traditions struggle to survive. A young girl, Maggie, is training to become the perfect killer under the teaching of Sam, a fearless member of the Zu triad.

Few years later, as HK is celebrating the year of the Ox, Maggie executes her latest contract by killing a member of the Chin triad who was stealing money from the Zu.

A meeting is then organized between the Zu and the Chin, the two major triads in the city. But instead of easing the tensions, the meeting does nothing but bringing back the memory of a previous conflict that broke out 15 years ago after the killing of Chen, the former Dragon Head of the Chin. And as history repeating itself, Wong, the current head of the Chin gets killed by Sam during the meeting.

Nick and Simon, two policemen who have been on Sam’s trail for many years, are in charge of the case.

Mark, the new strong man of the Chin, decides to bring back Yuan, Chen’s son, to Hong Kong in order for him to claim his father’s inheritance and bring back power to the Chin. But Stanley, once a close friend to Chen, doesn’t seem thrilled by this idea.

Yuan lived in Bangkok for many years and is reluctant to walk in his father’s steps.

Yuan and Maggie, lost souls in a permanently changing city, will cross their paths looking for answers and truth hidden behind the traditions and obscurity of the triad world.