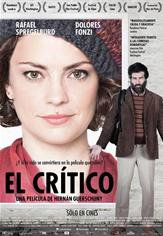 PRIMER PLANO FILM GROUP SA - as SALES All rights, Except Latin America, US and Turkey

Téllez is a prestigious film critic.He unexpectedly meets Sofía, a young and attractive woman that has very little to do with his good taste. Movements of random bring them together in idyllic situations. Téllez suspects that the movie genre that he hates the most is taking its revenge.