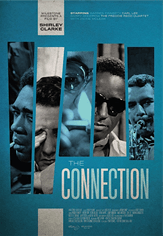 Shirley Clarke's first feature film was produced by Lewis Allen with money from hundreds of subscribers; like a Broadway play but at that time, unheard of for film. But The Connection, based on the controversial play by Jack Gelber, was far from what they could have imagined.