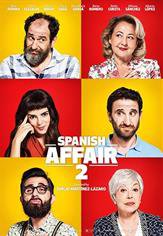 The highest-grossing Spanish film ever continues with SPANISH AFFAIR 2!! As funny and surprising as its prequel, the sequel is packed with enough adventure and laughter to make it an international comedy that could smash box-offices the world over.