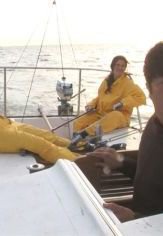 Tatiana and her ex-boyfriend Fernando go to sail on her new boat.
He invites his friend Puma, who invites his ex-girlfriend. Shortly after they set sail, old resentments appear among the two ex-couples; then a sudden storm takes them off course and they get lost on the widest river in the world.