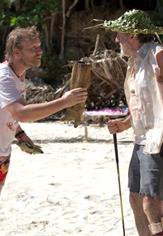 A finance crook on the run, and a dry-cleaner who’s just been deceived by his wife, land on a desert island after a plane crash. They can’t stand eachother so one of them try to get away but lands on the other side of the island which happens to be a luxurious resort. An adventure comedy in with references Francis Veber, Trading Places and Cast Away. Wild Bunch wide release on Feb.17 2016.