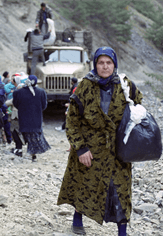 SEE YOU IN CHECHNYA

When I was 22, I went to war. I went because I was in love. In Georgia in 1999, I met a photographer who was going to photograph the brutal conflict in Chechnya. There I met war reporters for the first time. When going to war, they perhap’s didn’t realise the conflict would return home with them.