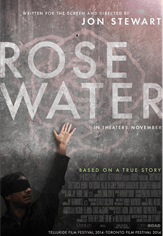 ROSEWATER is the incredible true story of Canadian Iranian broadcast journalist Maziar Bahari. While covering the 2009 Iranian elections, Bahari was wrongfully arrested for treason and detained in Tehran's Evin prison where he developed an oddly symbiotic relationship with his interrogator.