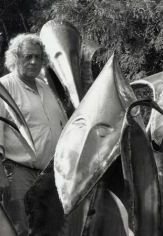 WALKING THE DOG - as PROD

In "Reinhoud, my sculptor” Blaise, son of Reinhoud D’Haese tells the story of the life of this exceptional artist during the second half of the 20th century.He was part of the Cobra movement in Paris in the forties which opened up the possibility of free spontaneity and experiment to him.