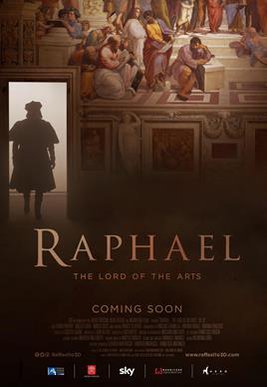 RAPHAEL - THE LORD OF THE ARTS

Raphael – the Lord of the Arts (also available in 3D) is the first film adaptation of the life and work of one of the most famous artists in the world - Raphael Sanzio.
Few figures in the history of art have lived a life so full of intensity and fascination quite like Raphael Sanzio. He died aged just 37 and yet managed to leave an indelible mark on art. In a well-balanced dialogue between historical reconstructions and artistic commentary, the film retraces the most significant moments of Raphael’s life. Expert contributions delivered with feeling by great art historians Antonio Paolucci, Vincenzo Farinella and Antonio Natali, enrich the story of the life and work of the artist. The film is set in 20 locations, two of which are major exclusives, the Vatican Logge and Cardinal Bibbiena’s apartment in the Apostolic Palace, and shows over 30 works of art, among the most famous and most representative of Raphael’s entire work.
This is a project developed by the creators of “Florence and the Uffizi Gallery in 3D” and “The Vatican Museums in 3D”, supported by contributions from some of the best creative talents from the Italian film industry, such as production designer Francesco Frigeri and costume designer Maurizio Millenotti. Playing the part of Raphael is actor Flavio Parenti, with Enrico Lo Verso in the role of Giovanni Santi, Angela Curri as Fornarina and Marco Cocci as Pietro Bembo.
Beauty comes to life in a crescendo through the brushwork and enduring genius of one of the most talented artists the world has ever known.