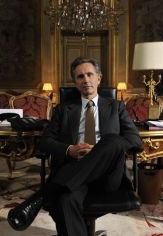 Alexandre Taillard de Vorms, France’s Minister of Foreign Affairs, is a force to be reckoned with, who takes on American neo-cons, corrupt Russians and the like. Enter Arthur Vlaminck who is hired as head of “language” at the ministry.
In other words, he is to write the minister's speeches.