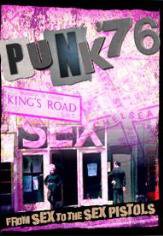 PUNK '76: THE BIRTH OF ANARCHY

Sex, Drugs, Clothes & Rock ‘n’ Roll. Along with a strong dash of political dissent added to the mix, every ingredient was present in the Molotov cocktail that was Punk in ’76, a movement that would go on to turn popular culture on its head and divide the United Kingdom in the Queen’s silver Jubilee