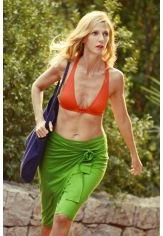 Dumped by her boyfriend, Pauline lets herself dragged by her sister in a palace on the Italian riviera. Instead of enjoying farniente, she persuades herself that a crime has been committed in the hotel and improvises herself detective, involving in her investigation a seducing Italian swimming instr