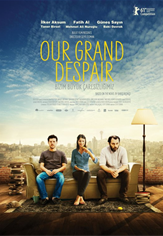 Our Grand Despair is an adaptation from Baris Bicakci's novel with the same title. Seemingly it tells the story of two men in their late thirties who fall in love with the same young girl, but it is rather more a film about the love-like intimate friendship between them.