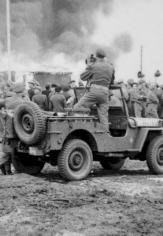 'Night Will Fall’ tells the story of the liberation of the Nazi Concentration camps. Using remarkable archive footage and testimony from both survivors and liberators, it tells of the efforts made to document the almost unbelievable scenes that the allies encountered on Liberation.