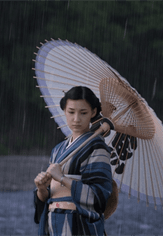 MY DARLING OF THE MOUNTAINS

With My Darling of the Mountains Tokuichi in Love, film director Ishii has remained loyal to the greatness of Anma to Onna ( a 1938 film by Shimizu Hiroshi ) while at the same time imbuing it with his own essence, in the process of creating a Japanese-film Classic all his own.