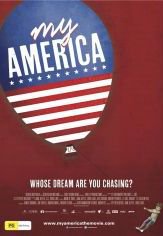 My America, a provocative and whimsical cinema documentary exploring what America means to millions of people around the world as seen through the eyes of an Australian-Hungarian Gen Y filmmaker, the grandson of the controversial former communist Prime Minister of Hungary, András Hegedüs.