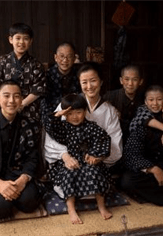 “You are not to cut those trees. Those are the “Mother’s” trees.” During the World War II, the “Mother” raised seven of her sons by herself. As the war became fiercer, her son was called for the military service one by one. Wishing they would return alive someday, she planted a tree for each son.