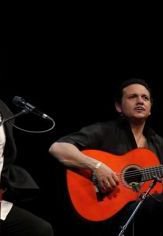 The documentary is a musical film about Enrique Morente and has just been finished shooting a few days before the death of the famous flamenco-singer. The movie shows his last years in which he concentrated on songs about poems written by Pablo Picasso.