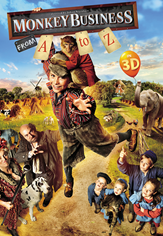 MONKEY BUSINESS from A to Z (family film) is the first Dutch film to be recorded entirely in 3D.

British company Vision3 has been called in to lend their expertise to this production, having worked on the Oscar-winning film Gravity and Pirates of the Caribbean: On Stranger Tides, as well as Jupiter Ascending, Edge of Tomorrow, Jack The Giant Slayer and World War Z.