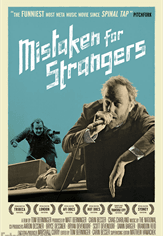 Hailed by Michael Moore as "one of the best documentaries about a band that I've ever seen" and by Pitchfork as "the funniest, most meta music movie since SPINAL TAP," MISTAKEN FOR STRANGERS is a truly hilarious, unusual, and moving film about two brothers, Matt and Tom Berninger.