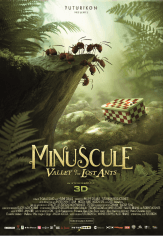 MINUSCULE - VALLEY OF THE LOST ANTS

Minuscule - Valley of the Lost Ants is a hybrid feature film mixing magnificent real-life nature settings and computer generated characters all shot in stereoscopic 3D, a world premiere! It has been released in about 80% of the world and is one of the most successful French films abroad in 2014!