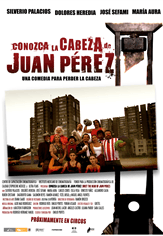 MEET THE HEAD OF JUAN PEREZ

Hylarious comedy with a dark sense of humor, about a low life magician, who promises a sensational beheading act to keep his job in his beloved circus.
With no money or time to put up his act, our illusionist is forced to break into a Museum to steal an authentic Guillotine that carries a curse.