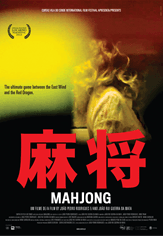 Varziela, Vila do Conde, the biggest Chinatown in Portugal.
A man wearing a hat and a missing woman. A high-heeled shoe, a blond wig and a Chinese dress.
The confrontation between the East Wind and the Red Dragon; the cardinal points switched as in an ultimate Mahjong game.