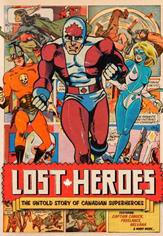 LOST HEROES is the story of Canada’s forgotten comic book superheroes and their legendary creators. LOST HEROES is the tale of a small country striving to create its own heroes but finding itself constantly out muscled by better-funded and better-marketed superheroes from the media empire next door.