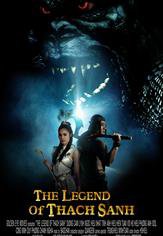 By Do Quang HAI AU

“Legend of Thach Sanh” movie based on the Vietnamese fairy tale-Thach Sanh, it's about a woodchopper named Thach Sanh who has extraordinary strength. He was the only man capable of fighting and winning The Cordial - a three times bigger and fire breathing monster.
The movie took place in Hung King 9th era. It's a mythology, emotional and action movie. This moive revolves around the love story of Princess Quynh Nga - daughter of King Hung Vuong 9th - with Thach Sanh. Thach Sanh rescued the princess from the hands of the thieves, after that they swore to love each other forever, no matter what will happen in the future.