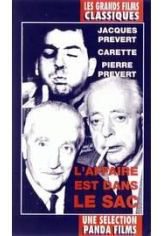 CINEXPORT - as SALES All rights, World

Outside France, Jacques Prévert is best known as a screenwriter; among his credits are a number of films that have become classics of the French cinema. His first screenplay was written for his brother, Pierre Prévert, the director of L’Affaire est dans le sac (1932).
Benjamin Déboisé, a hatter,