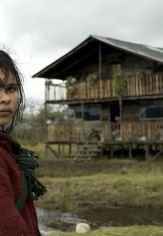 Fleeing a massacre in her remote Colombian village, Alicia is attempting to make a new life in the high Andes at the lakeside "La Sirga" guesthouse, owned by her uncle Oscar. There she tries to rebuild herself and eventually feels safe, until her fears and the war threat resurface again.