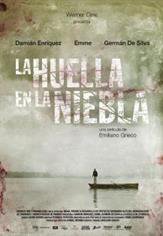 TRACE IN THE FOG

Elias kills his brother and runs away, injured. Lost in the mist, he goes back to his island. The flood has taken everything away, leaving his house empty and abandoned. His father takes him in but doesn't trust Elias story. Some neighbors tell him where he can find Lara and his son. But he finds her with a new family. Elias insists in going back, quits drinking, build a new shack and gets a job on a ship.