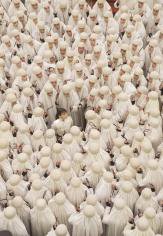 JACKY IN THE KINGDOM OF WOMEN

In the People’s Democratic Republic of Bubunne, it’s the women who are in power, while the men wear veils and look after the home. One of these men, Jacky, has the same inaccessible fantasy as all the bachelors in the land – to marry the Colonelle, daughter of the dictatrix known as the Generale.