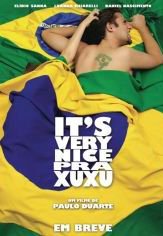 The bahiana Rayane spends every Carnival in San Paulo trying to find a gringo boyfriend. Her cousin Anidio arrange a plan to help Joao Pedro to win Rayane' s love just by pretending to be American, but both of them can't speak English and Joao Pedro's father is Arabian and anti-American.