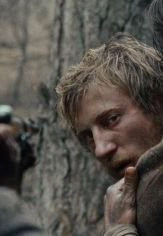 In German-occupied western Soviet Union in 1942, a man tries to make a moral choice under immoral circumstances when wrongly accused of collaborating. His humanity is put to the test on the tense forest journey to his execution by partisans. An epic historical drama from the director of MY JOY.