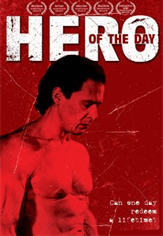 HERO OF THE DAY

Mark Chambers, a down and out former professional football player plans to redeem himself unbeknown-st to Allen, a documentary filmmaker capturing a day in the hero's life. A thrilling and heartfelt (found footage) drama, the first of its kind.