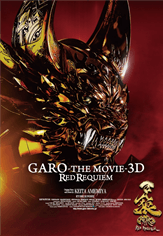 A theatrical movie version of GARO (2005) is now in post production as a 3D movie for release in 2010. Under the project name "GARO - RED REQUIEM", the film adapts the original special-effects TV series, which was created and directed by Kamen Rider Zero's Keita Amemiya.