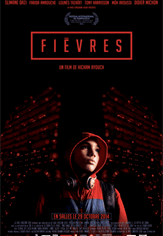 Benjamin is a child living a war against the world. He has only known violence and social care homes. When his mother goes to prison, he learns that he has a father and goes to live with him in the suburbs of a city in France.