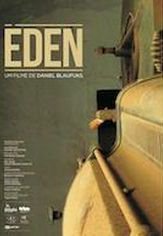 EDEN is a documentary about the cinema collective memory of a social microcosm implanted in the middle of the Atlantic Ocean - São Vicente island in Cape Verde archipelago. A place in which the only way of leaving the island was by sea or through watching films in local theaters.