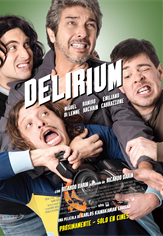 Tired of his routine, Federico decide to make a movie with Mariano and Martin. Although he has no idea, the statistics of international production companies support his idea. To make the idea work, they need a star: Ricardo Darín who, after a misunderstanding, acepts with hilarious consequences.